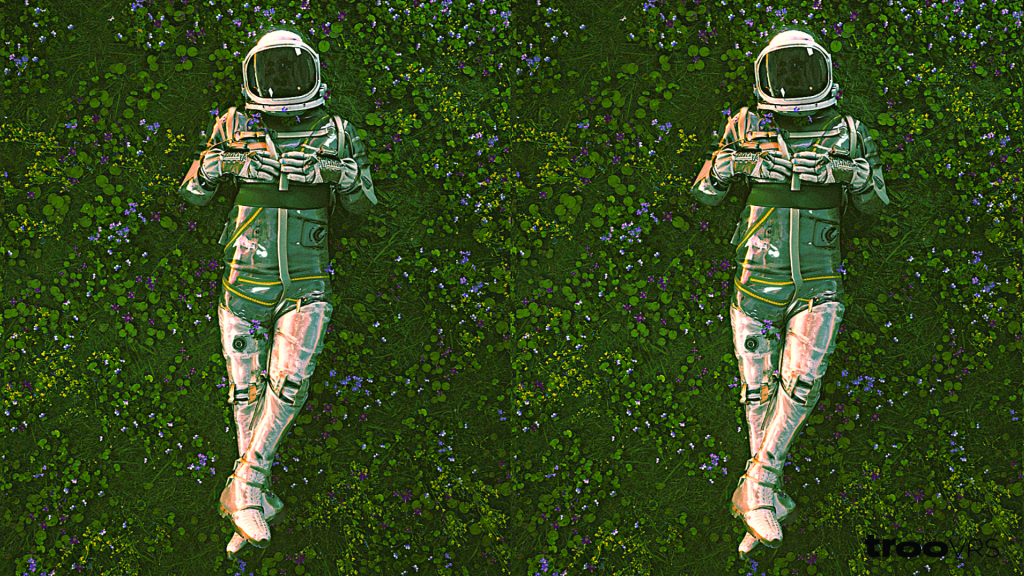 Can the worlds of the metaverse help us find inner peace?

There are boundless avenues for engagement in the metaverse. So far, trooVRS has shown that the metaverse has only just begun, and many areas such as Style and Sustainability are bursting at the seams with new ideas and directions to explore. However, with the anxieties and problems we face in the real world every day, it is reasonable to question whether the creation of an entirely new one is the right response.

We do not want to rebuild the world in the image of our worst former selves, and we need to take accountability as the metaverse comes into view. That’s why trooVRS is here to present the case for Self-Care in the metaverse, and the most promising efforts being developed so far. While the metaverse can be called a retreat from reality, perhaps it could also be a shelter: a place to rest, recharge, reconnect and regain perspective on what matters most.

The connective benefits of the metaverse

The internet was a revolution in human connection. Unfortunately, it has also become a creator of isolation and alienation. Much of the potential in internet communication is hamstrung by the limits of the digital, be it distance, visibility, or even tone of voice lost in translation during texting.

Yet even the smallest connections can make a huge difference.

In Sean O’Neal’s feature for MensHealth on the effects of friendships made or sustained through gaming, many men spoke up about the very real relationships they create online. It’s an era where “former Surgeon General Vivek H. Murthy went so far as to declare loneliness a public health epidemic,” before the COVID-19 pandemic closed off even more socialization. Men socialize in very particular ways, and gaming scratches a lot of those itches. O’Neal reports conversations from one man who said gaming helped him connect with friends while grieving a parent’s death, while another discovered lifelong friends that he now sees in person all of the time.

Who knew that massively-multiplayer online Halo matches could bring people together? Well, arguably, many of us. For millennials and Gen Z, games have always been a part of our lives. The metaverse asks if these online friendships can become even more powerful and intimate. It does not only benefit the gamers. During the pandemic, one of the most isolated groups was the elderly, especially those in nursing homes.

As reported by GMW3, the developer MyndVR “worked with hundreds of senior living communities across the United States, seeing a significant surge in popularity within the last two years.” Utilizing the MyndVR goggles, senior citizens were able to travel the world, play games, and share it all with loved ones, even while in lockdown.

Such technological breakthroughs could fulfill the early promise of the internet, bringing us one step closer to true communion in a virtual space. This easing of connection wouldn’t be limited to friends and family, either. A lack of access to therapeutic care is a huge problem in our modern world, and VR might be the venue to solve it.

The therapeutic possibilities of the metaverse

A huge hurdle for improving mental health is the decision to actually seek it out. However, when we are unhealthy or struggling with mental or physical illness, it can be far more difficult to access care.

In a guest column for Road To VR, founder Noah Robinson speaks about the motivation to create his company Innerworld (formerly Help Chat). He spent his early years playing the rudimentary online RPG Runescape, and much like O’Neal’s interview subjects found through Halo or other online games, it was a world where he could truly be himself. It was one of the first places where Robinson felt comfortable enough to come out as gay.

This eventually led to Robinson realizing that the metaverse could provide a platform that, like Runescape, would be a zone for socializing – but now it could be entirely focused on helping people achieve their mental health goals. Using digital avatars, people can come together to hold meetings, discussions, and social gatherings.

Although Innerworlds and other metaverse platforms with self-care elements like Sensorium do not feature licensed therapists, there are social and mental benefits to experiencing a virtual world. As Robinson writes, “[o]ne of our members publicly shared that she had not been able to leave her house in nearly three years. [Innerworld] helped her to feel comfortable leaving the house again, and she reported her experience was ‘infinitely better than three years of therapy.'”

This might sound overblown, but recent breakthroughs in neuroscience show otherwise. As Fast Company reports, Joseph O’Keefe and Edvar and May-Britt Moser won the Nobel Prize for Medicine in 2014 for uncovering deeper secrets about the so-called “GPS system” of the brain. Long-time VR researcher Giuseppe Riva elaborates on this, explaining how VR “can be particularly effective for treating mental health issues when the anxiety is tethered to a specific memory or place, as in post-traumatic stress disorder.”

In this sense, a user can safely return to arenas of their memory that have been locked off to them due to trauma. Think of it like an advanced, metaverse form of therapeutic exposure. While research is still young, the results already seem quite promising.

Meditation, if practiced regularly, can technically be done anywhere. However, if you’ve ever actually tried to meditate, you know how difficult it can be to escape the distractions of the world. The environment can be key, especially for those new to the practice.

While meditating in the metaverse might sound slightly ridiculous at first, it can indeed assist in creating a more peaceful environment for contemplation and clearing of the mind. As VRScout reports, meditation applications like Guided Meditation VR can transport users to over forty distinct locations that might be more relaxing than simply closing your eyes in an apartment. All it takes is access to a device like the Oculus Quest 2.

While the metaverse can often be painted as yet another distraction, there could be real potential when it comes to facilitating both the experience and knowledge of mindfulness and meditation. Men’s Journal covers how a solid meditation practice can enhance everything from athletic performance, to sleep, to creativity.

Other platforms like Tripp, Inc. have raised millions in funding as they develop even more advanced meditation software. Los Angeles Business Journal reports that Tripp is moving toward live group meditations and other innovations. Such a development could bring it all full circle, as the metaverse brings us closer together, and closer to our inner selves too.

Developers and users alike should not neglect self-care in any reality, virtual or otherwise. Even in the age of the metaverse, we must continue to explore what it means to be human. The radical changes on the horizon will not change that.

That’s why trooVRS created this introductory series, touching on three of the ten Verticals our platform has defined as the foundations of a fully realized metaverse. The trooVRS metaverse will be building outward from here, to meet the future halfway, and Self-Care is at the forefront of this effort.

In our metaverse ecosystem, you’ll not only find the resources to grow your knowledge, but experiences and communities to change your life. From custom-created programs, like meditation rooms, to collective gatherings for a metaverse meditation retreat guided by world-renowned practitioners, trooVRS will be a hub for tools and partnerships that will make access to Self-Care easier, fun, and engaging.

While much talk around the metaverse is consumed with the technology and the earliest projects collecting hype, our goal at trooVRS is to illustrate the true breadth of this space. As the philosopher David Chalmers said to The New York Times earlier this year, “my analogy would be… we’re moving to a new, uninhabited country [in the metaverse] and setting up a society. The issues will be somewhat different from the issues where we came from, but I wouldn’t consider that escapism.”

So take a breath. Seek the other seekers. Contemplate what this era of change could bring. The metaverse needs pioneers.

Posted in Content and tagged metaverse, selfcare, wellness
The Sustainability of New Worlds in The Metaverse →